Insight into the hidden costs of solar systems

Insight into the hidden costs of solar systems

“A single repair is fine, “was the general trend.”

Although solar systems are reliable, the chance of problems is not zero. And then there are the many annoyances about the data connection of the inverter. With a growing number of installations, the chance of service costs also grows. This is something that many installers have overlooked, and the expenses that follow are becoming a bigger problem. More and more often, we hear from our customers that they employ several men for maintenance, repairs, and repairing Wi-Fi connections.

In this article, we show how high those costs are. And to give you a hint of the veil: for an average residential system, the costs can easily be € 30 per year per system, excluding material costs. Do you have 1000 installations active? Reserve already € 30,000 per year. Do you also give an extensive installation guarantee? Then those costs become a lot higher. This immediately reveals the growing need for service contracts. If you do not have a service contract, customers often expect free service. That can be very expensive. Via service contracts, you have the chance to maintain a healthy margin, plus a satisfied customer with an optimal performing solar system.

Solar Monkey helps you further with the introduction of service contracts. In the article below, we mainly focus on the estimation of the service costs, so that you can use a price with a healthy margin. In short, the benefits of a service contract:

Calculate your costs? Make an appointment!

Make an appointment directly with our specialists!

Which cost items should you pay attention to?

Determining the expected costs is not always easy. After all, there are many variables. The expenses that you have to make are directly dependent on the chance of failure of specific components. In it, you have to look at panels, inverters, mounting material, and online connections. You also have the service level that you want to deliver. Do you cover the repair costs? Any material costs? Are you coming to reset the inverter’s WiFi connection?

To give you a reasonable estimate, we have developed a simulation model at Solar Monkey. We enter your preferences, and the model calculates an estimate of the costs.

How often does hardware break? The “bathtub” curve.

A lot of research has been done into the failure of various components, also specifically for solar systems. We call the chance that something breaks in a specified year the “failure rate.” When a product reaches a certain age, the risk of failure will increase. 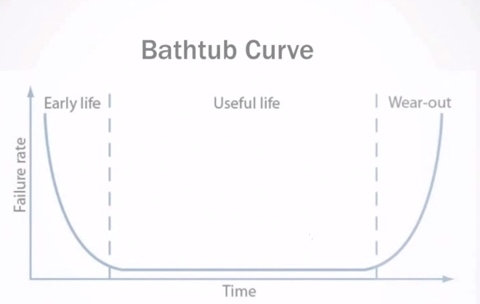 How often does something break?

For solar panels, it is not always clear what we should count as “failure.” After all, panels degrade over time, and sometimes that goes a little faster than usual. The American National Renewable Energy Laboratory speaks of failure when the yield has fallen by more than 20% due to factors that are not easy to restore. A heavily soiled panel therefore naturally does not count as a failure. The most common causes of failure are hotspots, PID (Potential Induced Degradation), and delamination.

To get a picture of the failure rates, we look at both our data and literature review. At Solar Monkey, we analyze more than 7000 solar systems every day. This shows that at least 3% of all systems perform significantly under expectations. That could be a problem with a panel, inverter or a connector.

Almost all systems we analyze are less than five years old. That is why we have delved further into the literature. Regarding panels, we find anything but a clear picture, since there are many variations in material and environmental factors. The figure below summarizes the results of a report called “Photovoltaic failure and degradation modes.” You can see that the failure rate in moderate climates fluctuates between 0.01% and 0.6% per year. Another publication talks about a  failure rate of 0.05%. In our calculation model, we take a conservative number and assume a default percentage of 0.2% up to the age of 25, after which this percentage increases. Make sure that this is per panel. For a system of 12 panels, 0.2% failure rate per panel means a total percentage of 2.3% per year. 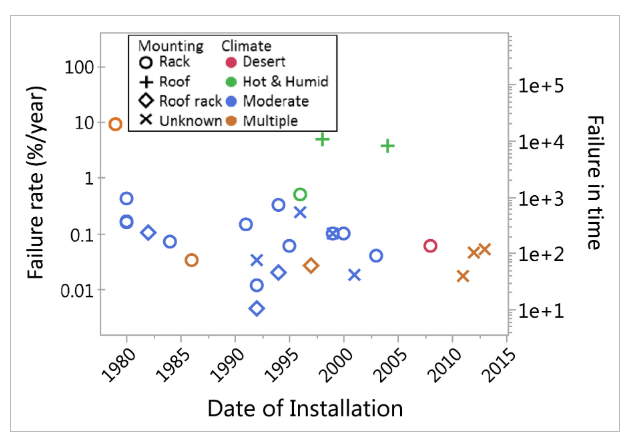 Then about the inverters; Zeversolar proudly reported a failure rate of 0.6%. SMA reports a failure rate of less than 0.1%, which is experienced as reasonably good by many experts in forums. The use of optimizers or microinverters has technical advantages, but with the increase in the number of components, the chance of errors also increases (with the same product reliability). Indeed, in the case of optimizers, several horror stories can be found about this, although reliability seems to be getting better all the time. We see higher reliability for Enphase in their reports, with a failure rate lower than 0.033% per microinverter. That means a failure rate of 0.4% for a system of 12 panels. An additional advantage with Enphase is a long service life of 20 years and products that therefore last longer than standard inverters.

For our calculation model, we assume a failure rate of 0.1% for string inverters that increases after the predicted minimum lifespan of 12 years. For systems with optimizers or micro-inverters, we use a failure rate of 0.033% per inverter. We do not yet make a distinction between different inverter brands because we do not, however, have fully comprehensive data.

How often does the connection fail? And what does that cost?

With Solar Monkey, we analyze more than 7,000 solar panel systems daily. Of every 1000 inverters that are connected to Wi-Fi, more than 100 have a connection problem at least once a year that does not go away on its own. They often fail several times a year. If you visit the customer for that, then that goes a long way in the figures.

There is a good chance that you will spend more money on repairing data connections than on fixing broken material. That is why we recommend that everyone primarily uses a cable or 4G dongle connection.

Through our Zonnegarant service, we resolve 80% remotely through clear online instructions; the remaining 20% require a visit.

We have made a calculation model with as input your desired service level and the estimated failure rates of the materials. The model then simulates the expected costs. We enter the following variables:

The model calculates all the chances for you, resulting in the average costs per year. Below an example of the result. In this case, an example of a supplier that provides a service for restoring Wi-Fi connections from the inverter. No wonder we recommend using a more stable connection! Besides, we see that labor costs for replacing inverters are steadily increasing over time. 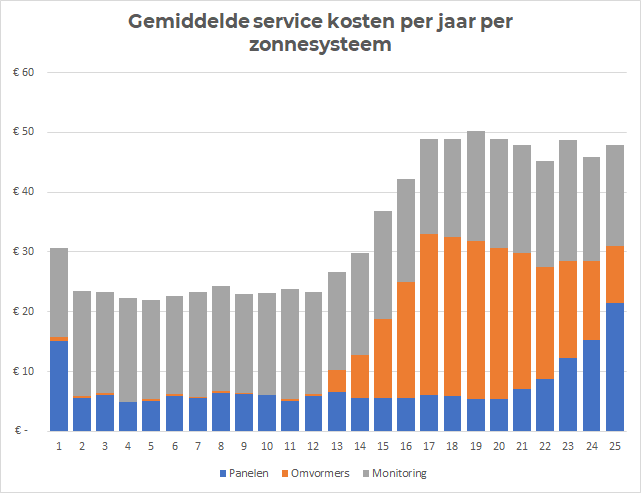 Costs and revenues of service contracts: a summary

We recommend keeping a healthy margin of 50%. The installer above would, therefore, be wise to offer this service package for € 60- € 70 per year. Besides, we see that pre-setting a more stable data connection will save a lot of costs afterward.

I hope that by now it has become clear that offering free long-term warranty and service is a model that is not feasible in the long term and can be destructive to the survival of your business. Service contracts are a transparent, fair, and even profitable way to deliver excellent lasting service to your customers. We are happy to help you on your way with this next step!

Make an appointment with our specialists

We have based the above research on our data in combination with literature research. We cordially invite manufacturers to share their data with us. That way we can advise our customers even better. We will, of course, work entirely objectively in all circumstances. We will never recommend certain brands over others, but only share facts known to us. 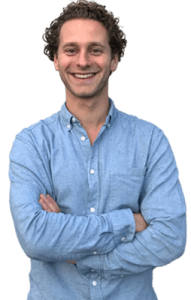 What are you waiting for?

Join the hundreds of installers who
have simplified their solar sales.